Mimi and her girls

Mimi and her girls 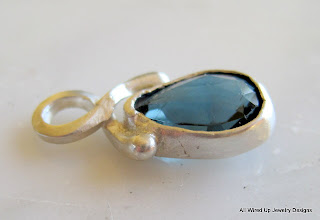 I realize this isn't a picture that says much to the average person who likes jewelry, it's just a blue stone in a silver casing with a ring on top so you can put a chain through it and hang it around your neck. To someone who has journeyed along the path of an aspiring metalsmiths, they can see all the pain I went through to get just this far and will know I am still struggling because it fought me every step of the way. They say it's always the journey that's most important. So here's a little story about my journey to get to this point. 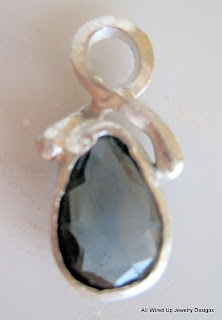 First, the blue stone was a gorgeous London blue topaz briolette that I had wire wrapped as a pendant. While trying to repair a small mistake in the wire wrapping I broke the tip of the stone where the wire goes through and holds it together. That was a really expensive slip of the pliers! So, I call on my trusty group of friends on the aspiring metalsmiths thread and get some advice. Make a step bezel says Clarity, you can do it, here's how. So I follow directions and find that, even following directions, metal has a mind of it's own. The little square wire I soldered onto the bottom of the bezel wire, made it almost impossible to move it into shape around my lovely stone. I had to do this in order to solder it together so the stone would stay in there and not fall out the back. The little square wire is the "step" it sits on. After much pushing, pulling, yelling and throwing a few obscenities, I did get it soldered closed and guess what- the stone fit. But, yes, there is always a but in metalsmithing , the bottom of the stone was fatter than the top, so it was laying belly up, tip down. The extra wire at the top is supposed to lay smoothly along the stone folded over with no" ruffles" to just hold it from falling out the front. Well that's all very nice in theory, but no one told me that after all that pushing and pulling that my little tool called a "bezel pusher" was going to need the strength of a sumo wrestler behind it to push what is now called "work hardened" metal over that stone. Along comes more advice from my friend Clarity (you must see her work at http://www.scrollworkdesigns.etsy.com/  ) she really does know what she's talking about, but she has a horseshoe somewhere to get all the work cranked out every week that she does! Clarity tells me, put the stone in something that's hard but with a dip in it so the stone will sit down in it while tapping with your hammer to get out all those nasty ruffles. You can see those in the picture above.  Well, that little piece at the top of the page is small- smaller than a breadbox for sure, and smaller than every bottlecap and twist top I could find in my house. So, I finally found a teeny tiny cap and hammered away. I also have a little tool that I call a bezel smoother- it has a notch in the bottom that you scoot around the bezel- again trying to remove ruffles. (I actually used to like ruffles- on clothes anyhow).
I must digress a bit, because another step I took- without asking first- was to solder on the top of this project- the bail used to hang the pendant. This soldering not only got in the way of the hammering I was trying to do, but also hardened up the metal around the stone even more! Enter the second sumo wrestler to assist the first one! My thought was, I couldn't solder anything to the top after the stone was in there, the torch would fry my lovely blue topaz. As you can see from the second picture, the twist I put in the top made the part I soldered way to close to the front- no way to get a tiny hammer in that space.
Well, Clarity and I chatted again and she says, you can do this, try again, smooth it out, hammer it some more and file the back of that thing so it looks like you really tried. I won't bore you with the details of the third session, but the picture at the top is the final result I obtained without shattering the stone or melting the whole thing down and starting over. I learned a ton of information, hopefully I can retain it, and make a lot fewer mistakes the next time.
I see a lot of beautiful, professional looking work on Etsy and Artfire and many other sites. I wish the customers that shopped at these sites had even a tiny idea of what it takes to get to a place where you feel you have something really worth taking a picture of, writing a description for and offering up to the world to see and buy, handmade by you, with love and an awful lot of melted metal and crumbled stones before you have finally arrived at the point of offering your work for sale.
Posted by AllWiredUpJewelryDesigns at 10:09 PM

Welcome To My Blog

I'm not much on self promotion, but I do like to write about what I'm learning about jewelry making, my family's escapades and share some of the wonderful places I gotten to visit. I hope to share not only information about myself and my shops where I sell my own handcrafted jewelry, but to also help promote fellow jewelry artists and their shops and promote handcrafted artists everywhere.

Please check out some great artists listed on my blog list!